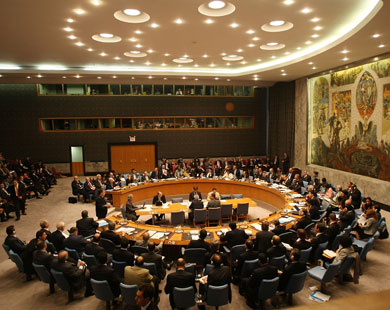 The Russia-called UNSC session failed to produce any results regarding Yemen on Friday.

The UN Security Council held an emergency meeting on Yemen called by Russia on Friday.
&nbspMoscow remains concerned over the security situation in the country, and has frequently called on the 15-member chamber to endorse its resolution calling for humanitarian pauses in the bombardment and an all-inclusive arms embargo. Following the closed door meeting at the UN, Russia’s envoy to the UN, Vitaly Churkin told the journalist that Russian proposal is still valid.

&quotWe continue to believe that our call for humanitarian pauses is very relevant. A lot of ... hospitals, schools, mosques, even the building in which the UN personnel lived in Sanaa, were destroyed on April 21," he said.

The permanent representative stressed that the United States supported the coalition bombing of Yemen and thus, the United States should also &quotbear the responsibility for the humanitarian consequences, the responsibility for the inviolability of diplomatic facilities."
Calling the situation on the ground &quotextremely complex", Churkin stressed the need for an urgent dialogue to solve the conflict in Yemen. According to him, the sides were &quotvery close to an agreement, but the negotiations broke down when a new wave of military action started."


&quotWe believe that the sooner the Secretary General, and his Special Representative would be willing to convene a meeting and it will take place, the better," said Churkin.
Before the Security Council discussions, UN Secretary General Ban Ki-moon urged an immediate resumption of fuel imports as petrol shortages are preventing aid agencies from doing their job on the ground &quotmaking the already catastrophic humanitarian situation in Yemen even worse."

&quotAttacks on civilians and civilian infrastructure, including hospitals, humanitarian warehouses and UN compounds, are unacceptable and in violation of international humanitarian law," Ban added.

Washington, meanwhile, said that it supports the Saudi position against militias.
&quotThe thing that we have articulated is that we strongly support the efforts of the Saudis, who are reacting to legitimate concerns that they have about the security situation along their border," White House Press Secretary Josh Earnest said. At the same time Earnest said that the US continues to support negotiations.

The five weeks of fighting in Yemen has left nearly 1,250 people martyred, and at least 5,044 people injured between March 19 and April 27, the World Health Organization said Friday. Local estimates on the ground are much higher.