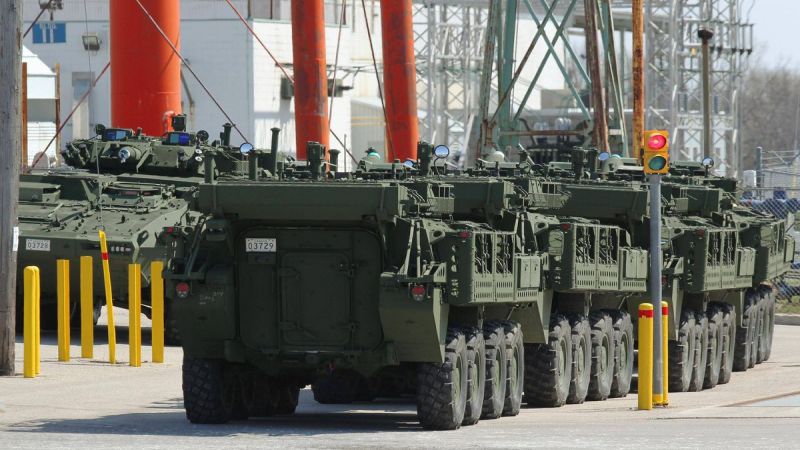 Canadian shipments of military goods to Saudi Arabia hit a record high in 2019 despite a moratorium on approvals of new arms export permits announced by Prime Minister Justin Trudeau’s government after the murder of dissident journalist Jamal Khashoggi at the hands of Saudi agents.

A new report from the department of Global Affairs shows Canada exported close to $2.9-billion of military equipment to Saudi Arabia in 2019, nearly all of it light armoured vehicles (LAVs) manufactured in London, Ont., by a subsidiary of U.S. defence contractor General Dynamics. That’s up from $1.3-billion in exports in 2018 and just under $500-million in 2017.

In November, 2018, after the murder of Mr. Khashoggi, and mounting condemnation of the Saudi-led war in neighbouring Yemen, the Canadian government announced it would cease issuing new export permits for arms sales to Saudi Arabia and would review all military exports to the kingdom, including a $14-billion deal to sell LAVs to Saudi Arabia. In December, 2018, Mr. Trudeau himself told CTV News in a year-end interview that he wanted to cancel the LAV contract: “We are engaged ... to try and see if there is a way of no longer exporting these vehicles to Saudi Arabia," he said.

Exports, however, continued apace with combat vehicles – 183 of them – comprising the vast majority of shipments to the desert kingdom. Other exports to Saudi Arabia over 2019 included 31 large-calibre artillery systems and 152 heavy machine guns – weaponry that defence watchers presume are being mounted on the LAVs. Another 635 rifles were shipped to Saudi Arabia, exports that arms-control advocates speculate will include Canadian sniper rifles popular with Saudi authorities.

In June, 2019, the United Nations special rapporteur on extrajudicial, summary or arbitrary killings issued a report saying that Mr. Khashoggi “was the victim of a premeditated extrajudicial execution, for which the State of Saudi Arabia is responsible.” The report said, “Saudi state agents, 15 of them, acted under cover of their official status and used state means to execute Mr. Khashoggi.”

The Canadian government waited another 10 months before announcing the results of its review of Saudi arms sales. In early April, as the COVID-19 pandemic was spreading, Foreign Affairs Minister François-Philippe Champagne said Ottawa had found no credible evidence linking Canadian exports of military equipment or other controlled goods to Saudi Arabian human-rights violations. He also revealed penalty clauses in the LAV deal made it prohibitive to cancel and would force taxpayers to pay up to the full value of the contract in damages. He also said General Dynamics would require more export permit approvals to fulfill the LAV sale deal.

“This suspend-and-reinstate routine had absolutely no impact on anything. It was all a public relations thing,” Mr. Jaramillo said. “The Saudis knew it was meaningless all along,” he added, pointing to 2019 remarks by Saudi Minister of State for Foreign Affairs Adel Jubeir who said: “Regarding the Canada arms deal, we see the Canadian government going ahead with the deal, so the statements are for domestic consumption.”

The 10-year, $14-billion contract was secured by the former Conservative government. The Liberals, however, gave the green light for shipments to proceed when former foreign affairs minister Stéphane Dion issued the first export permits back in 2016. Awarding permits is a vital step in sanctioning Canadian arms exports and the decision is not supposed to be affected by whether a contract is already signed. It amounts to a judgment call by the Canadian government that there is no reasonable risk the combat vehicles will be used against civilians in Saudi Arabia, which has an abysmal human-rights record.

Alex Neve, secretary-general of Amnesty International Canada, said it is disconcerting that Ottawa made it seem it had imposed a moratorium on new approvals of arms sales to Saudi Arabia in the aftermath of Mr. Khashoggi’s murder when, in fact, there were record levels of military hardware flowing to the Saudis.

“That entire picture does not give any confidence that we were truly seeing a serious, effective response to the concerns that had come up around arms dealings with Saudi Arabia,” Mr. Neve said.

He said Amnesty has long been opposed to the sales of Canadian-made LAVs to Saudi security forces because there are “repeated and very credible reports” that they are being used in the Yemen conflict.

NDP foreign affairs critic Jack Harris accused the Liberals of “hypocrisy” by pretending they had stopped arms shipments by announcing the moratorium.

“It clearly tarnishes Canada’s reputation,” he said, and reiterated the NDP call for the Ottawa to end the arms contract with Riyadh.

Asked for comment on the jump in arms exports to Saudi Arabia, the Department of Global Affairs said existing permit holders weren’t affected by the moratorium. “While Canada’s review of arms exports to Saudi Arabia was ongoing, companies with existing export permits had the authority to continue to ship under those permits,” department spokesman Sylvain Leclerc said.

He said Ottawa will ensure that any applications for permits comply with the legal requirements under Canadian law and the global Arms Trade Treaty.

Source: The Globe and Mail, Edited by Website Team