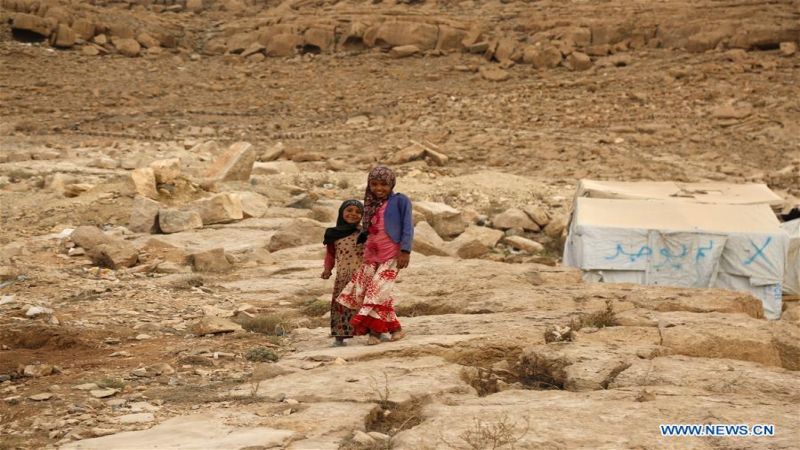 In Amran province, northern Yemen, more than 5,000 displaced people live in hundreds of tents lined up as far as the eyes can see.

They say inadequate sanitation and lack of healthcare make them vulnerable to deadly diseases, particularly if the novel coronavirus breaks out.

"We are vulnerable to epidemic diseases including the coronavirus ... In the camp, the displaced lack medical care and even the protective mask," Maher Qassem, one of the displaced in Khamer camp, told Xinhua.

"There must be precautionary procedures to protect the displaced against epidemics," Qassem, 37, said.

Although Yemen has not recorded any case of COVID-19 so far, there are fears that a potential outbreak could pose grave pressure on the country that suffered five years of civil war and has more than half of its health system damaged.

In the past two weeks, the rival parties have both imposed health precautionary measures in major cities, including halt of school classes and domestic travel for two weeks.

However, the health authorities are still struggling to cope with the already existing problems such as cholera, malnutrition and dengue fever.

"I was displaced to this camp in the Khamer area because of the war. Someone here gave me a blanket to cover my children but we still suffer from cold and hunger," Omar Hassan, another displaced, told Xinhua.

Abdu Ahmed, his wife and nine children have also fled the war to this camp, but they complain of dire circumstances.

"We were displaced from Al-Wazaia village (in Taiz province) to here because of the war, and our condition now is very hard with no blankets or food," he said.

Over 3 million displaced people in Yemen rely on assistances from the United Nations aid agencies regularly since the country slid into civil war in late 2014, when the Saudi-backed resigned regime of former president Abd-Rabbu Mansour Hadi out fled from the capital Sanaa.

The United Nations is trying to end the war that has killed tens of thousands of people and pushed over 20 million to the brink of starvation.

For Qassem, he hopes the war will end.

"We hope the war will end, so we can go back to our homes to live as we were before."