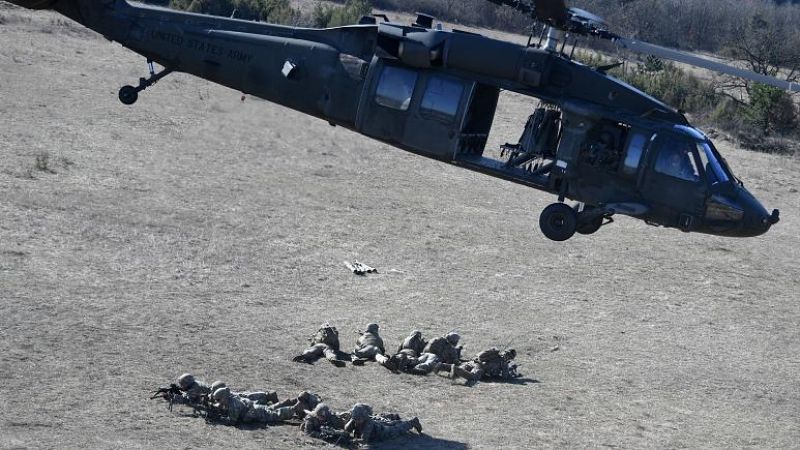 The largest exporters of weapons in the last five years were the United States, Russia, France, Germany and China.

The report published by the Stockholm International Peace Research Institute (SIPRI) compares arms trade deal data collected between 2015 to 2019 to that between 2010 to 2014.

It shows that Middle Eastern countries have been buying more weapons than before, with Saudi Arabia being the biggest importer worldwide.

Several other European countries are in the top ten of arms exporters, including the UK (3.7 per cent), Spain (3.1 per cent) and Italy (2.1 per cent).

Increase in exports from the US and France

The US has strongly profited from the ongoing conflicts in the Middle East and the increasing demand for its military aircraft in other regions, such as Europe, Japan and Taiwan. More than every third weapon on this planet has been manufactured in the US, new data shows. The country holds a 36 per cent market share and is exporting arms into 96 countries overall. That is an increase of five per cent in total share and 23 per cent in volume, compared to the five years prior.

"Half of US arms exports in the past five years went to the Middle East, and half of those went to Saudi Arabia," says Pieter D. Wezeman, Senior Researcher at SIPRI. "At the same time, demand for the USA’s advanced military aircraft increased, particularly in Europe, Australia, Japan and Taiwan."

The US' contribution to the global arms trade is not a development that can be attributed to US President Donald Trump. In fact, many of the largest arms deals were closed during the administration of former President Barack Obama.

With its increase in exports, the US is widening the gap between itself and runner-up, Russia. Between 2010 and 2014, US exports were 17 per cent higher than Russia's, compared to the last five years, where it was 76 per cent higher.

The EU and West European countries

All in all, European countries accounted for more than a quarter of the global arms trade.

France's arms trade increased drastically by 72 per cent between 2015 and 2019, compared to the previous five years. It accounts for 7.9 per cent of the global arms trade.

France delivered major arms to 75 states in the last five years and increased its exports to the middle east by 363 per cent.

Meanwhile, Germany's arms exports increased by 17 per cent in the last five years, placing it fourth among arms exporting countries. Despite the country's halt on exports to Saudi Arabia, Germany has made several other controversial deals in the last years, f.ex. with Algeria and Egypt.

Germany's best arms client is, however, South Korea, which has received four German submarines since 2015. South Korea is followed by Greece and Algeria.

Meanwhile, British arms exports fell by 15 per cent, mainly as a result of fewer deals with Saudi Arabia, India and the US.

At the same time, European countries have started to buy more arms again. While arm imports had fallen by 27 per cent between 2005-2009 and 2010-14, they ended up being 3.2 per cent higher in this last five year period.

Most of these arms came from the US.

Major arms were used in Ukraine for example, which was fighting separatists in the east of the country. Nevertheless, arms imports were very low there.

On top of that, there have been skirmishes between Armenia and Azerbaijan, leading Armenia's arms imports to rise by 415 per cent.

Who buys the weapons?

The main importers of weapons in the last five years were Saudi Arabia with twelve per cent, India with 9.2 per cent and Egypt with 5.8 per cent.

The ongoing conflicts in the Middle East have countries there stepping up their weapons imports by 61 per cent compared to the years before, with Saudi Arabia being the world's largest importer between 2015 and 2019.

The country bought 130 per cent more weapons than during the previous five-year period and contributed to twelve per cent of global imports.

The United Arab Emirates, similarly involved in the war in Yemen, but also in Libya, was the eighth largest importer of arms in the last five years - two-thirds of those weapons came from the US.

India was the second-largest importer worldwide. It's neighbour Pakistan ranks 11th. A lot of countries have been selling weapons to both of these feuding states for decades.

No country sanctioned for arms exports to Libya

The war between the internationally recognized Libyan Government of National Accord (GNA) and the Libyan National Army (LNA) that started in 2014 continued in 2019.

Both sides have received weapons from abroad in violation of the 2011 United Nations arms embargo on Libya, but no country has been sanctioned for this.

Details about these arms deliveries are uncertain and the volume cannot be estimated.

Warring parties have received arms from Turkey, Jordan, the UAE, Belarus and Egypt.