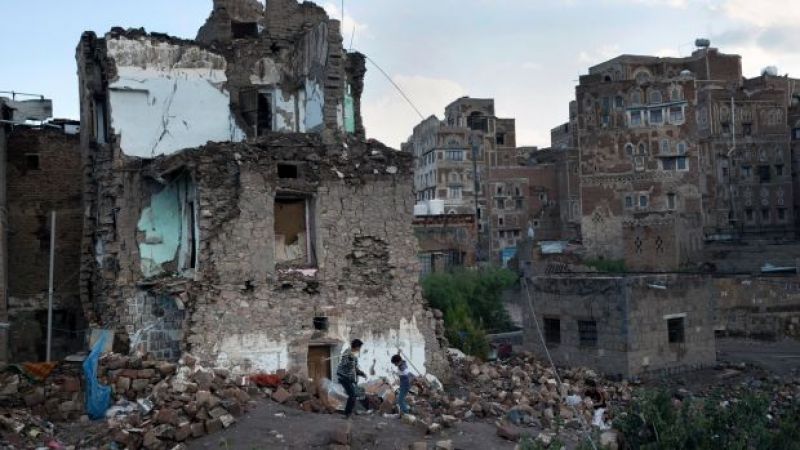 German doctor in Yemen: 'Every day I hear shooting outside'

Five years into the war in Yemen, there are so many guns in the country that Yemenis carry them "like others wear a watch — and they use them," according to Götz Gerresheim.

In the shadow of the Syrian war, this month will mark five years since Arab coalition entered the civil war in Yemen, after years of sporadic conflict. More than 90,000 have died due to the fighting since 2015.

Despite a five-month de-escalation, there are signs the conflict is escalating again. Saudi airstrikes on Sanaa have resumed. Last week the Houthi Ansarullah revolutionaries seized Hazm, a strategic town that looks over oil-wealthy desert plains, in what analysts said could change the course of the war.

But as it draws on, Yemeni civilians are those paying the highest price of the fighting.

DW spoke to Götz Gerresheim, a German anesthesiologist with Doctors without Borders (MSF) in Yemen's southern city of Aden. He says it is war's secondary effects — an enormous amount of small arms supplying continuous street violence and uncontrollable fatal antibiotic-resistant infections, for example — that are having the most impact.

DW: You've been at a trauma hospital in Yemen's southern city of Aden for almost a month now. What's your impression of the situation there?

Götz Gerresheim: Things are stable but everybody is prepared if it becomes unstable. We could have much more fighting in the city of Aden any minute. I'm not allowed to leave the hospital and five, six, seven times every day I hear shooting outside. Although this is my sixth mission, I had to get used to this. Sometimes it's only a single shot and sometimes it's a whole magazine and then it's answered by another episode of shooting. Inside the hospital, visitors have to leave their Kalashnikovs rifles or AK-47s at the door.

At our hospital there are always around 60 to 70 patients. 80% of these patients are gunshot victims — in most cases multiple gunshots.

This trauma hospital here is like the home base but we have other MSF teams which are much closer to the frontline, in Mocha or Bayda, for example. They focus on major bleeding and perforations of bowels and things like that. Every day we receive two to three patients from these field hospitals close to the frontline and they are mostly injured by remnants of bombs and explosive devices, both adults and kids.

Here we have more shrapnel injuries from bomb explosions. With these kinds of injuries, shrapnel enters the body everywhere and we have to operate on them again and again 'til we have cleared the wounds. I just finished a case in the operating theater — a 30-year old from Mocha close to the frontline who had the same kind of multiple shrapnel injuries from an explosive device. The lucky guy still has all his limbs.

But I was really shocked when I saw how high the rate of what we call multi-drug resistant organisms is. These are bacteria which get used to antibiotic treatments and become resistant, making it more and more difficult to treat patients. This rate of multi-resistant organisms in Yemen is extremely high.

In my hospital in Germany, we have a maximum of two cases of a particularly dangerous bacteria like this a year and everybody panics. Here in Aden, 60% of patients with infections have a multi-resistant strain. The pharma industry cannot find new antibiotic treatments that can tackle this. That's what we've seen here, patients with a bloodstream infection from these bacteria, they all died.

You've been on six missions in total including Syria more recently. How does Yemen compare?

Our missions are only short, four weeks, but as the only anesthesiologist, I'm on duty 24 hours, seven days a week, so I have really had enough after four weeks. In Syria I was based about two hours' drive north of Raqqa and there we actually only experienced explosive devices, like hand-grenades. When "Islamic State" was driven out of the city, it left these explosive devices almost everywhere, including hidden in dolls and teddy bears.

So it was the other way around: 80% of injuries from explosive devices and bombs and only a small number of gunshot wounds. I've never seen as many gunshot wounds on my missions as I see here in Aden. In the north, even more than here in the south, people wear their guns like others wear a watch. And people use them as well.

Some 80% of Yemen's 30 million people rely on aid to survive. The US is considering cutting some aid to the country's north. What kind of impact do you think this could have?

Yemen has had an almost complete blockade on airspace, there are no deliveries via sea or road and even for the World Food Program it's very, very difficult to deliver food. What I see is that the patients we receive from the northern area, especially the kids, are severely malnourished

And when I compare this with my other missions, it seems to me that MSF is the only one here. In the north of Syria there weren't many aid organizations. In other missions, like Monrovia, even during the war, there were many others. So what do I expect if the aid, which is here is withdrawn? There's going to be a catastrophe.