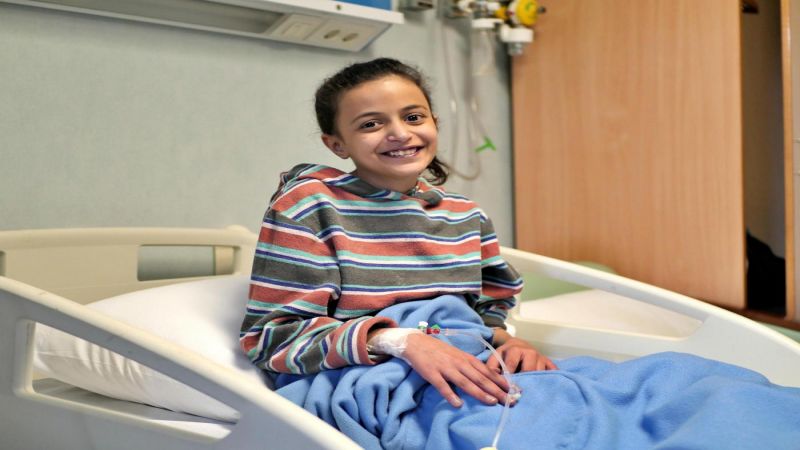 Thirteen-year-old Shahad al-Harethi’s fragile-looking frame appears even smaller beneath the white sheets in the big hospital bed, yet she still manages to welcome visitors with a beaming smile.

The teenager is among 29 Yemenis flown to Jordan on two mercy flights – the first civilian flights to leave from the north of Yemen since the start of the war in 2015.

The move has been heralded as a positive step in the agonisingly slow peace negotiations between Yemen’s Houthi movement and the Saudi-led coalition - but with a further 29 million people caught amid the five-year war and unable to leave the country, these handful of people are just a drop in the ocean.

Harethi suffers from congenital heart disease and says she longs for the day when she can play with her brothers and sisters without struggling to breathe or suffering from extreme exhaustion.

She will undergo the open-heart surgery she so desperately needs while in Jordan.

The young girl is chatty and good-natured despite her condition. She says she enjoys school and her favourite lesson is English. When she grows up, she wants to be a TV presenter or a journalist.

This opportunity felt like a miracle, her father Khaled told Middle East Eye, as he gestured with his hands to express the feeling of bursting with happiness.

“I’ve only ever had a bad feeling twice in my life - when I got married and when I got on that plane,” he said teasingly, sat next to his wife.

All jokes aside, he said when their first flight in October was cancelled amid a breakdown in negotiations, he and his wife hit their lowest level of despair.

“We had to go back home and all our hope was lost,” he said.

The family are from Ibb, a city 194km south of the capital Sana’a.

Before the war, Khaled worked as a civil servant - but it has been four years since he received his salary due to the country’s economic crisis and the war.

This was not the family’s first attempt at seeking treatment overseas; they travelled to Saudi Arabia in 2015, but they were told to return to Yemen because of the war before Shahad was able to undergo surgery.

They were meant to fly back to Saudi Arabia two weeks later, but that trip never happened as the coalition imposed an air blockade on the capital Sana’a.

Yemen’s healthcare system was already fragile prior to war, however the conflict that has decimated the country for the last five years has left less than 50 percent of hospitals and medical facilities fully or partially operational.

Public sector employees, including healthcare workers, have not been paid salaries in several years and rely on incentives paid by the World Health Organisation (WHO).

Meanwhile, conditions such as cancer, kidney disease as well as others are now killing more people than the war due to limited treatment options available inside the country.

The coalition-imposed sea, air and land blockade on Yemen began in March 2015.

It has severely restricted the flow of food, fuel, and medicine to civilians and is a violation of international humanitarian law, according to Human Rights Watch.

A staggering 19.7 million people desperately require access to healthcare, according to the WHO.

Another patient to have been flown in on the mercy flights is 43-year-old Daulah, who did not give her surname.

She has thyroid cancer but has no idea how serious her condition is because of the lack of medical equipment in Yemen.

Following the cancelled flights in October, WHO thought it best to keep the patients in Sana’a in case flights once again became possible.

Daulah and her husband ended up living in a hotel away from their children for four months.

“I’ve cried a lot because it’s hard to be away from my children," she tells MEE.

"My youngest is 10 years old. They could visit, but they were too far away and weren’t able to get to the hotel.

"My husband convinced me to stay. Once we were in the air I was overwhelmed with happiness.

"Now I just want to get better so that I can get back to my children.”

In a statement in response to news of the mercy flights, the Norwegian Refugee Council's Yemen country director Mohammed Abdi said the agreement “comes too late for thousands of Yemenis who died waiting to leave the country for urgent life-saving care”.

The warring sides “need to end their political wrangling and fully reopen Sana’a airport for commercial flights”, he added.

Sultana Begum, the NRC advocacy manager in Yemen, called the move a “diplomatic breakthrough” but stressed that it was a tiny step.

“According to government figures up to 32,000 people have died in the last three years while waiting for specialised treatment, although that’s not a figure we’re able to verify,” she told MEE, adding the NRC’s biggest focus is opening Sanaa’s airport to commercial flights once more.

Begum highlighted the length of time negotiations concerning the mercy flights have taken – discussions having first begun in October 2018.

“There was a de-escalation of violence in the country last year," she said.

As part of the Stockholm agreement, air strikes were stopped in Hodeida where there have been lots of civilian casualties, and diplomatic backchannels and ceasefires were established in various locations.

“There was a really positive change last year, which created the space needed for an agreement about these mercy flights," said Begum.

In addition to a lack of progress in resolving the conflict in Yemen, the UN and its agencies in the country have been embroiled in corruption allegations – from diverting donated food, medicine, fuel and money.

An agreement was also made to allow humanitarian aid into Taiz governorate.

“But while getting bogged down with making the Stockholm agreement work, more violence has erupted in other parts of the country,” said Begum.

“There is a narrow window of opportunity to have a nationwide ceasefire and start political talks but we’re really concerned this escalating violence will be damaging to the constructive talks that have already taken place.”

Elisabeth Kendall, a senior research fellow at Oxford University, said allowing 29 people to receive medical care they otherwise would not was of course welcome, but added that to consider the move as anything substantial in bringing the conflict to the end was “delusional”.

“It needs to be multiplied by 1,000 to make any difference," Kendall told MEE.

"The fighting is getting worse and that’s why the United Nations and everyone else clings to positivity, which is understandable after five years of efforts and very little to show for them.

“But the fact it has taken so long shows just how difficult it is to get these sides aligned on something as obvious and uncontroversial as allowing sick children to receive treatment.

"We need Sanaa airport to be fully open,” she said.

The hope is for a ceasefire, Kendall added, but pointed out that even if confidence-building exercises between the Houthis and the coalition delivered in the form of the mercy flights were successful, there remained a myriad of warring parties to be taken into consideration.