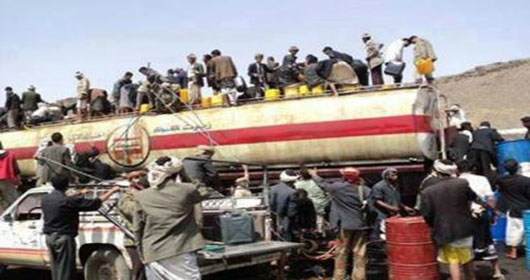 Yemen in Danger of Becoming Completely Isolated from the World

Abdulla Al Ariqy, like many Yemenis woke up this morning grateful that telecommunications and internet lines were still operating. News over social media said that telephone lines and internet will be cut off on Monday morning at 9am, local time. "Our house turned into a call center, family inside and outside Yemen were calling, messaging, WhatsApping, Facebooking, we were saying our goodbyes, it was insane I think the entire country panicked, we didn’t think it was going to happen so soon," said Al Ariqy.

The Public Telecommunication Establishment [PTC] said that the establishment’s stock of diesel had been exhausted over that past four weeks due to the lack of petroleum derivatives, the limited amounts obtained from The Ministry of Oil, and the continuous power cuts. As a result, local and international calls and internet service will be cut completely in few days if no solution is found.

On Thursday the head of the Post and Telecommunications Union, said that Aden, Lahj, Al Dale, and Abyan will be the first cities to experience complete communication blackout, due to the violent armed clashes between the Houthis and the Popular Resistance which prevent the government from delivering diesel to these areas.

Yasmeen Mutahar a university student in Taiz said, "We will be doomed this means we won’t know what’s happening, when we hear a bomb we call family and friends to see where it hit, we need news and social media to know what’s going on."

The Saudi-led coalition have imposed air and sea blockade since the beginning of the operation on March 26th, they have complete control of air space, ports and there are no commercial planes or ships allowed in or out of the country. Basel Mohammed in Aden called it a catastrophe," No one will know what’s happening to us, we need people around the world to know what’s happening, how will we call each other, call for help, call ambulances, or get in touch with relief organizations if we run out of food."


With the borders closed, when telecommunications stop, Yemen will be in danger of becoming completely isolated from the world.