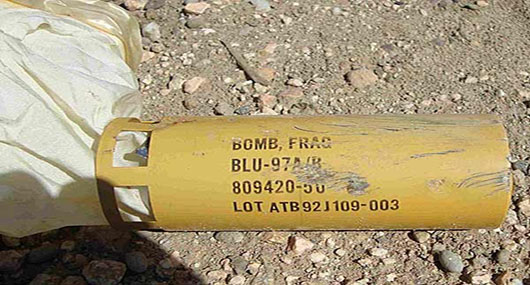 Once again the US proves to support the aggressor in its offensive against the children and women.
As its habit with the Zionist entity, Washington stood to defend its Saudi ally in its attacks against the Yemeni people.

The United States defended its supplies of cluster munitions Sunday, after Human Rights Watch said the bombs had been used by the Saudi-led aggression in Yemen.
HRW said it had gathered photographs, video and other evidence indicating that cluster munitions had been used in coalition air strikes in Saada province in Yemen&rsquos northern mountains in recent weeks.

It said that analysis of satellite imagery suggested that the weapons had landed on a cultivated plateau, within 600 meters of populated areas.

&quotWe take all accounts of civilian deaths due to the ongoing hostilities in Yemen very seriously," a US War Department said.
The official said Washington was &quotlooking carefully" into the HRW report&rsquos information.

HRW said that the munitions used in Yemen appeared to be the CBU-105 Sensor Fuzed Weapons manufactured by the Textron Systems Corporation and supplied to both Saudi Arabia and the United Arab Emirates by the United States in recent years.

The weapon is banned by the Convention on Cluster Munitions but Washington permits its use and export because it boasts an unexploded ordnance rate of less than one percent.
The US military Department official pointed to that policy to highlight Washington&rsquos &quotstringent requirements."

&quotIn addition, recipients of such transfers must commit that cluster munitions will only be used against clearly defined military targets and will not be used where civilians are known to be present or in areas normally inhabited by civilians," the official added.
&quotThis is obviously a critical element of the policy."

Cluster munitions are prohibited by a 2008 treaty adopted by 116 countries, but not by Saudi Arabia and its coalition partners or the United States.