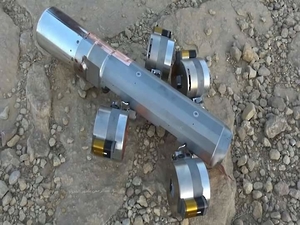 The Human Rights Watch [HRW] rights organization said that reliable evidence shows that Saudi Arabia has used banned cluster ammunitions provided by the United States in its deadly airstrikes against Yemen, in a report on Sunday.

The HRW said in a report on Sunday that photographs, video, and other evidence have surfaced since mid-April 2015 indicating that cluster ammunitions have been used in attacks on Yemen&rsquos northern province of Sa&rsquoada in recent weeks.

The HRW further established through analysis of satellite imagery that the weapons appeared to land on a cultivated plateau, within 600 meters of several dozen buildings in four to six village clusters.

A video appeared on YouTube on April 17 showing numerous objects with parachutes slowly descending from the sky. The footage zooms out to show an explosion in mid-air and several black smoke clouds from other blasts.

The rights group then determined the location of the incident as al-Shaaf in Saqeen, in the western part of Sa&rsquoada using satellite imagery analysis.

An activist also based in the Yemeni capital, Sana&rsquoa, gave the HRW photos he had received from a resident of Sa&rsquoada Province, who said he took them on April 17 at the site of an air raid in the al-Amar area of Safra, about 30 kilometers south of the city of Sa&rsquoada.

The HRW further said that the images showed the remnants of two CBU-105 Sensor Fuzed Weapons manufactured by the Textron Systems Corporation and supplied to Saudi Arabia and the United Arab Emirates by the US in recent years.

In one of the photographs, an empty BLU-108 delivery canister can be seen, while the other shows a BLU-108 canister with four submunitions still attached to it. The location of the remnants in the photographs is close to where the video was filmed.

The arms director at the HRW, Steve Goose, said that, ’Saudi-led cluster munition airstrikes have been hitting areas near villages, putting local people in danger,’ adding that, ’These weapons should never be used under any circumstances.’

He also said that Saudi Arabia and the United States are violating ’the global standard that rejects cluster munitions because of their long-term threat to civilians.’

Saudi Arabia launched its military aggression against Yemen on March 26 - without a UN mandate - in a bid to undermine the Houthi Ansarullah movement and to restore power to the country&rsquos fugitive former president, Abd Rabbuh Mansur Hadi, who is a staunch ally of Riyadh.