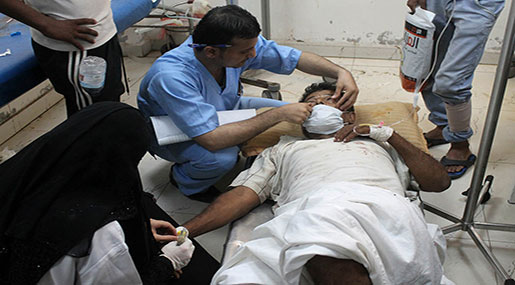 Saving the Saudis from Their Yemen Disaster

After a visit by US Secretary of State John Kerry last week, Saudi Arabia announced a five-day cease-fire of its bombing campaign in Yemen. It’s a step toward peace -- but only a baby step.


Saudi Arabia needs to recognize that its strategy in Yemen has been deeply counterproductive, stoking instability along a vital route for oil shipments, expanding a proxy war between Iran and Saudi Arabia, creating new sectarian fissures, and advancing the fortunes of al-Qaeda in the Arabian Peninsula. The US, European Union and United Nations Security Council need to push harder for a lasting cease-fire and reopen negotiations for a political solution to Yemen’s divisions.

War has compounded misery in the Arab world’s poorest country. More than 1,200 Yemenis have been killed. More than 300,000 Yemenis have been driven from their homes. Bombings and blockades have disrupted the delivery of goods to a nation that imports more than 80 percent of its food. Remittances have been cut off. Relief groups now warn of a cascading humanitarian crisis.


It would be one thing if the coalition’s 3,000-plus-sortie bombing campaign, which the US has supported with aerial refueling and intelligence, had defeated the Houthis in their misguided effort to take over Yemen by force. It hasn’t. The Saudis’ Plan B seems to be just more of the same: bombing the Houthis, and the cease-fire isn’t scheduled to begin until Tuesday -- until they come to the negotiating table on the coalition’s terms.

That approach only empowers al-Qaeda, which has captured territory, arms and money in the ensuing turmoil. And it seems to have attracted "ISIL" fighters. Moreover, the attacks have sharpened sectarian tensions in a country once noted for their absence.

That will require the promise of a more successful and sustained effort than the flawed National Dialogue Conference brokered by the United Nations in 2013. For starters, any peace talks should be held not in Saudi Arabia but in a neutral location -- Oman, for instance. One inducement is the interest that all parties, whether the US or the Houthis, Saudi Arabia or Iran, have in reversing the gains of al-Qaeda and "ISIL". Saudi Arabia and its Gulf neighbors also share an interest in helping Yemen to repair the damage of war and to develop its economy.