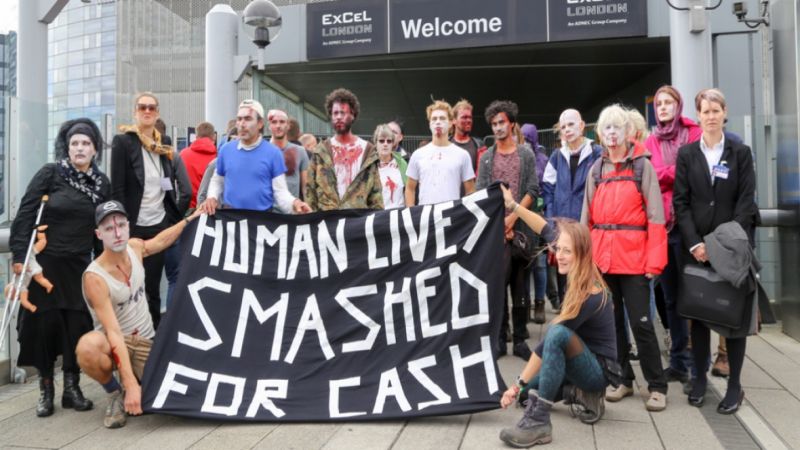 Peace campaigners protested as arms dealers held a luxury dinner at a swanky London hotel while Yemeni civilians face starvation due to the Saudi-led military onslaught on their country.

The annual feast of fine food and champagne laid on by the Aerospace, Defence and Security Group (ADS) brings politicians together with representatives of companies that have profited from the bombing of Yemen. This year, former home secretary Alan Johnson is a keynote speaker.

ADS is an arms industry trade body representing most of the world’s biggest military equipment firms. Attendance at the event costs £225 per head for members and £450 for non-members.

Ahead of the protest outside the Grosvenor House Hotel in Park Lane, Stop the Arms Fair spokeswoman Kirsten Bayes told the Star that she and her fellow activists wanted to let MPs know that their attendance at the dinner was unwelcome.

“It is unacceptable that the arms industry is gathering to drink champagne and fill their faces with luxury food while Yemen is starving,” she said.

The war has caused the worst humanitarian crisis in the world, with 14 million Yemenis at risk of famine, more than 85,000 children under the age of five having died from malnutrition and a cholera outbreak affecting over 1.2 million people due to the fighting and a Saudi-imposed blockade of the country.

The British government is directly involved since it has licensed almost £5 billion of weapons sales to the Saudi regime since the conflict began in 2015.

Campaign Against Arms Trade (Caat) wrote to Johnson ahead of the dinner urging him to reconsider his decision to speak but received no reply.

Caat’s Andrew Smith said: “Many of the companies in attendance have armed and supported the Saudi-led bombing of Yemen. While Yemen is being starved, the arms dealers will be swilling champagne, cosying up to politicians and trying to sell even more weapons.

“Alan Johnson is a respected public figure and should not be speaking at such a grotesque event. He should not be using his reputation to legitimise and enable those that profit from war and conflict.”

Companies that have paid for MPs to attend previous events include many of those which have profited from the Saudi-led aggression against Yemen, such as Europe's biggest arms company BAE Systems.

BAE produces the Typhoon aircraft that is being used to bombard Yemeni targets and the firm is currently in negotiations to sell another set of fighter jets to the regime.

Another company funding the dinner is Raytheon, which makes the Paveway IV bombs. Produced in Britain, these weapons have been linked to attacks on civilian targets.