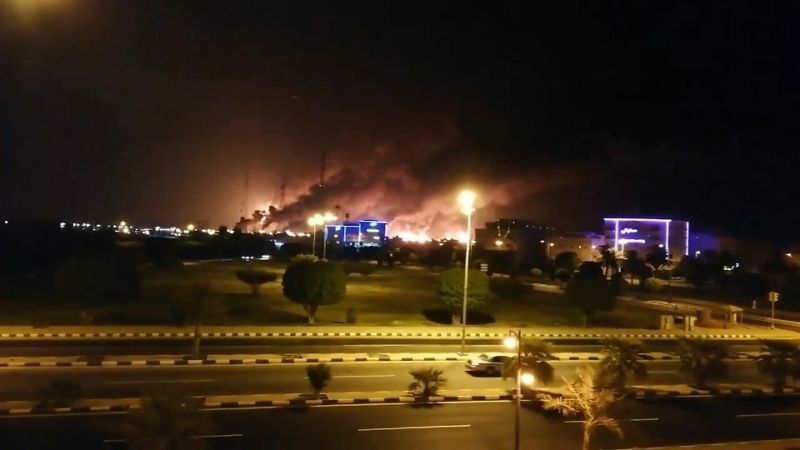 The recent attacks on Aramco facilities at the Abqaiq and Khurais fields are a turning point in the unjust war that Yemen was thrust into five years ago. Not because of the extent of the damage caused at the targeted Saudi refineries, but because of the effect on global oil markets that are still reacting, casting a shadow on the faltering Saudi economy, which is unlikely to recover quickly, according to many political and economic experts.

Despite Riyadh’s recent claims and reassurances aimed at preserving its reputation and the true value of Aramco, Saudi Arabia is relying heavily on US and international reactions. This reaffirms once again that it is far less than an independent state and not an effective regional power.

Saudi Energy Minister Abdul Aziz bin Salman tried to reassure global markets by saying that “the kingdom had restored half of the lost production and would fully restore output by the end of September.”

Many experts consider this to be unrealistic since the damage inflicted on the Abqaiq and Khurais fields is extensive. The attacks halted 7.5 million barrels of daily Saudi oil production, which is important for global demand and the Kingdom's economy. This drop places Saudi Arabia in a race against time to address the damage to its fields before the end of this month.

Transparency in the Saudi handling of the oil crisis is completely absent.

This is what is obvious. The claim about Aramco's ability to repair the damage within three weeks contradicts other news reports by various Western media outlets confirming that the damage is extensive and may take months to repair. So oil prices may rise at any time to record rates due to the kingdom's failure to provide a suitable assessment and a clear and long-lasting treatment plan. Moreover, the Saudi surplus does not meet the needs of the market for more than three weeks.

Observers attribute the recovery in Saudi stocks and the decline in oil prices after they recorded the biggest spike since the nineties in the wake of the attack on Aramco to three main factors. The first factor is the Kingdom's ability to compensate for lost oil production capacity through withdrawal and depletion of strategic reserves. This will not last long because it needs about 120 million barrels in just three weeks, which will weaken its position in any future oil crisis. Therefore, it will have to become a major buyer of refined products to cover its pledges. And this is already happening.

The other factor in the decline in oil prices is the surplus in global markets and the abundance of supply. Crude stocks were rising and demand is slowing, according to IEA warnings in the weeks leading up to the attack, with some oil exporters agreeing to cut output to more than the agreed amount to maintain favorable price levels.

Finally, the US president’s green light to cover the global market shortage from US strategic stocks was an important factor in the decline in prices. It is a matter linked to Trump's electoral calculations and has nothing to do with Saudi Arabia, which has repeatedly committed to lowering oil prices to gain US protection.

The options presented to confront the dangers to Saudi Arabia’s economic nerve will not work unless ending the aggression on Yemen as a mandatory prelude to the stability of the region and the world is at the top of the list. The repercussions are escalating and will not end in the near future, taking into consideration that the Saudi facilities and fields are vulnerable to bombing and destruction at any time and moment. What reached Abqaiq may reach Ghawar, the largest oil field in the Kingdom.

The Wall Street Journal, in turn, reiterated that the kingdom is looking to import oil to keep its exports flowing. It said in a report that shortly after the attacks on the kingdom's largest oil facilities, the latter is communicating with foreign producers to obtain crude oil and other petroleum products, increasing their usual trade flows to fill supply gaps.

Two people familiar with the matter told the newspaper that Saudi Arabia had asked the Iraqi National Oil Company, "Somo", for up to 20 million barrels of crude oil to supply domestic refineries in the Kingdom.

Traders said it was unclear what Aramco's exports would be in September, adding that Aramco is seeking this week to import an additional 300,000 barrels of oil a day.

The newspaper also reported last Tuesday that Saudi Arabia had to make adjustments to the crude grades it provides customers. Aramco told Indian refineries it could not deliver the high-quality Arab light crude it had ordered. Instead, it would send lower grade heavy crude. Aramco had already replaced five shipments of light Arab oil - including two bound for China - with heavy oil from Ras Tanura station in the Eastern Province this week.

At the expense of declining Saudi oil production and the postponement of exports from some Asian refiners, Russian oil producer Rosneft said its president Igor Sechin discussed with the Indian government the possibility of increasing Russian oil supplies, with operations in the SASREF and Petro Rabigh oil and petrochemical refineries in eastern Saudi Arabia shrinking by as much as 40%.

The International Monetary Fund also confirmed that the growth of the Saudi economy in 2019 will be 2.2% lower than it was last year, and that this depends very much on the volume of oil production in relation to OPEC quotas. Referring to Aramco's IPO, the Saudi regime has no choice but to delay until it gains investor confidence again.

In the midst of all these events, Riyadh stands idly by waiting for the US position. But Trump, who has been tasked by the United States Department of Defense to choose the appropriate response to the Aramco attacks, will find a greater chance of expanding his milking operations, which he has mastered.

And in terms of importance, the Abqaiq and Khurais oilfields are not only important at the level of Saudi Arabia, but also rank first in the classification of oil fields in the region and the world. The Abqaiq oil field has the largest oil processing facilities in Saudi Arabia, and 70% of Aramco's crude oil production is processed, equivalent to 6% of the world's total daily energy consumption.

The Abqaiq field is important globally, as it connects Saudi Arabia to Bahrain through the crude oil pipeline established in 1945 and has a capacity of 350 thousand barrels per day. Most of its production is pumped through the East-West crude oil pipeline. It should be noted here that the flow of oil was halted as a result of [Yemen’s] ‘Second Operation of Deterrence Balance’.

Khurais field is the second largest field in Saudi Arabia and contains the largest oil production plant in the world with a production capacity of 1.45 million barrels per day of oil. It is located about 250 km southwest of Dhahran and 150 km northeast of Riyadh. It is also adjacent to the field Ghawar, the largest oilfield in the world.