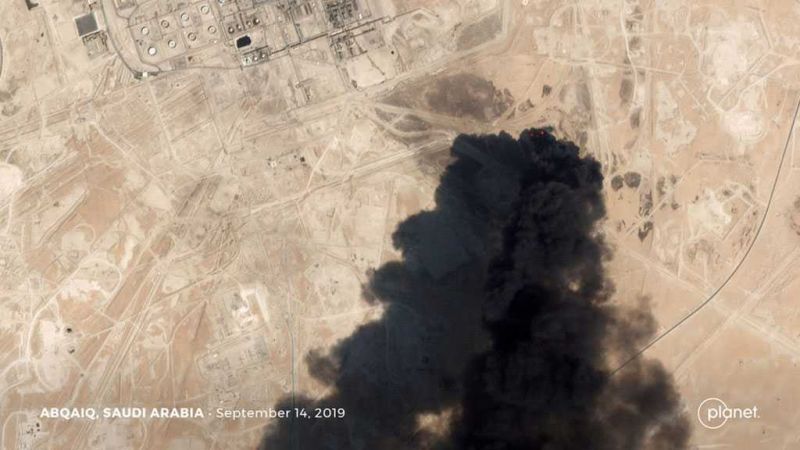 The devastating blitz on Saudi Arabia’s oil industry has led to a flurry of accusations from US officials blaming Iran. The reason for the finger-pointing is simple: Washington’s spectacular failure to protect its Saudi ally.

The Trump administration needs to scapegoat Iran for the latest military assault on Saudi Arabia because to acknowledge that the Houthis mounted such an audacious assault on the oil kingdom’s heartland would be an admission of American inadequacy.

Saudi Arabia has spent billions of dollars in recent years purchasing US Patriot missile defense systems and supposedly cutting-edge radar technology from the Pentagon. If the Yemenis can fly combat drones up to 1,000 kilometers into Saudi territory and knock out the linchpin production sites in the kingdom’s oil industry, then that should be a matter of huge embarrassment for US “protectors.”

American defense of Saudi Arabia is germane to their historical relationship. Saudi oil exports nominated in dollars for trade – the biggest on the planet – are vital for maintaining the petrodollar global market, which is in turn crucial for American economic power. In return, the US is obligated to be a protector of the Saudi monarchy, which comes with the lucrative added benefit of selling the kingdom weapons worth billions of dollars every year.

According to the Stockholm International Peace Research Institute, Saudi Arabia has the world’s third biggest military budget, behind the US and China. With an annual spend of around $68 billion, it is the world’s number one in terms of percentage of gross domestic product [8.8 per cent]. Most of the Saudi arms are sourced from the US, with Patriot missile systems in particular being a recent big-ticket item.

Yet for all that financial largesse and the finest American military technology, the oil kingdom just witnessed a potentially crippling wave of air assaults on its vital oil industry. Saudi oil production at its mammoth refinery complex at Abqaiq, 205 miles [330 kms] east of the capital Riyadh, was down 50 per cent after it was engulfed by flames following air strikes. One of the Saudi’s biggest oilfields, at Khurais, also in the Eastern Province, was also partially closed.

There are credible reports that the damage is much more serious than the Saudi officials are conceding. These key industrial sites may take weeks to repair.

US Secretary of State Mike Pompeo got it half right when he claimed, “Iran launched an unprecedented attack on the world’s energy supply”.

Yes, it is unprecedented. But Pompeo and other US officials have most likely got it wrong about blaming Iran.

Some Trump administration officials told US media that “cruise missiles” were responsible for the giant fireballs seen over the Saudi oil facilities. One was quoted anonymously as saying: “There’s no doubt that Iran is responsible for this… there’s no escaping it. There is no other candidate.”

In a hurried effort to substantiate accusations against Iran, satellite images were released which show what appears to be the aftermath of the air strike on the Abqaiq refinery complex. US officials claim the location of the explosions indicate the weapons originated not from Yemen to the south, but from either Iran or Iraq.

Even the normally dutiful New York Times expressed doubt about that claim, commenting in its report: “The satellite photographs released on Sunday did not appear as clear cut as officials suggested, with some appearing to show damage on the western side of facilities, not from the direction of Iran or Iraq.”

The accusations made by Pompeo and others are assertions in place of substantiated claims.

For its part, Iran has flatly dismissed the allegations that it had any involvement, saying that statements by Pompeo were “blind” and tantamount to setting up a conflict.

Iraq’s Prime Minister Adel Abdul Mahdi also rejected claims that his country’s territory might have been used by pro-Iranian Shia groups to launch the air strikes.

The Houthis in Yemen have issued unambiguous statements claiming responsibility for the air raids on the Saudi oil installations. They were specific that the weapons were drones, not missiles, adding with details that 10 unmanned aerial vehicles [UAVs] were deployed.

Notably too, most US media reported initially that the attacks were by drones flown from Yemen. Associated Press reported a level of sophistication in the attacks whereby drones were used first to disable the US Patriot radar systems before other UAVs proceeded to execute the air strikes.

It therefore seems that US officials are attempting to switch the story by blaming Iran. It is reckless scapegoating because the logical consequence could elicit a military attack against Iran, in which event Tehran has warned it is ready for war.

The rationale for blaming Iran is that the Yemenis are just not capable of using drones with such dramatic success against the Saudi oil industry. The culprit must be Iran, so the rationale goes. This is a follow-on from alleged sabotage by Iran against oil tankers in the Gulf earlier this summer.

However, a timeline shows that the Houthis are more than capable of launching ever-more powerful ballistic missiles and deeper penetrating drones into Saudi territory. The Houthis have been using drones from the beginning of the war which the US-backed Saudi-UAE coalition launched on the southern Arabian country in March 2015.

Over the past four years, the Houthi aerial firepower has gradually improved. Earlier, the Saudis, with American defense systems, were able to intercept drones and missiles from Yemen. But over the last year, the Houthis have increased their success rate for hitting targets in the Saudi interior, including the capital Riyadh.

In May this year, Houthi drones hit Saudi Arabia’s crucial east-west pipeline. Then in August, drones and ballistic missiles were reported to have struck the Shaybah oil field near the border with the United Arab Emirates [UAE], as well as the Dammam exporting complex in Saudi Arabia’s Eastern Province.

The Yemenis claim they are taking the war to Saudi Arabia and the UAE after years of relentless air strikes on their homeland which have resulted in nearly 90,000 dead. A recent UN report censured the US, Britain and France for possible complicity in war crimes through their military support for the Saudi coalition.

There must be trepidation among the monarchs in Saudi Arabia and the UAE that the Houthis from war-torn and starving Yemen are now coming after them with drones that could demolish their oil economies. What’s more, the much-vaunted American protector is not able to deliver on its strategic bargain, despite billions of dollars of Pentagon weaponry. That’s why Washington has to find an excuse by casting Iran as the villain.