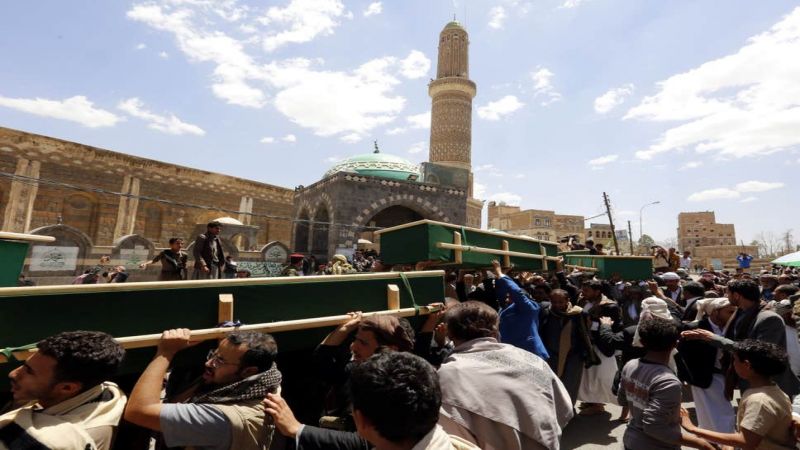 The family of a man killed by a Saudi airstrike at a funeral in Yemen has asked the Metropolitan Police to investigate the deadly bombing, opening the possibility that the perpetrators may be prosecuted in a British court.

Muhammad Ali al-Rowaishan was among 137 civilians killed in a 2016 bombing which hit a crowded funeral ceremony at a community hall the Yemeni capital Sana’a. After initially denying responsibility for the airstrike, Saudi Arabia eventually admitted fault and apologized.

In one of the first cases of its kind, Rowaishan’s family are now seeking to prosecute the people behind the strike in British courts using Universal Jurisdiction laws, which apply to serious international crimes.

Lawyers representing three family members have submitted complaints to the UK Metropolitan Police Counter Terror Command (SO15) and the US Department of Justice. If sufficient evidence exists to arrest the accused, they would be subject to prosecution in both countries.

“The law allows for certain serious international crimes to be prosecuted irrespective of where they took place, who the perpetrator is and what their nationality is,” said Rodney Dixon QC, who acting as counsel on behalf of the family members of the deceased.

“It's a very important case, given the notoriety of the attack, and the fact that the authorities of Saudi Arabia have admitted responsibility,” he added.

Mr Dixon said that the complaint names some suspects confidentially for the police to investigate and calls for police to identify other people involved in the airstrike.

The funeral hall was crowded with hundreds of people, including children, when it was attacked. One witness told the rights group: “When I got there, there were more than 50 burned bodies, many where you can still tell the features, but half of their body was gone, half of their head was gone, but the others, it was very, very hard to tell who they were.”

The case represents a landmark legal effort to hold the Saudi-led coalition accountable for what human rights groups have characterized as a pattern of war crimes in the country.

The United Nations has accused the Saudi-led coalition of “widespread and systematic” strikes on civilian targets. The coalition has admitted to causing civilian casualties in the past, but attributes the deaths to “unintentional mistakes”, and says it is committed to upholding international law.

Together with the US, the UK has played a major role in supporting the coalition’s military campaign against the Houthis – who have also been accused of war crimes by the UN.

The attempted prosecutions come as the UK is under increasing pressure over the sale of weapons to the Kingdom.

The British government is currently preparing to respond to a Court of Appeal judgement that forced it to freeze sales of UK arms to Saudi Arabia while it reconsiders whether they could be used to violate international humanitarian law.

The court found in June that the government “made no concluded assessments of whether the Saudi-led coalition had committed violations of international humanitarian law in the past, during the Yemen conflict, and made no attempt to do so”.

The criminal complaints were filed on behalf of Rowaishan’s uncle, UK national Nabeel Gubari; his brother, US citizen Abdulla Alrowashan, and another brother, Khalid Ali Saleh Al Ruwayshan, who is a Yemeni citizen.

The complaints argue that Saudi and Yemeni officials responsible for the bombing on 8 October 2016 should be investigated “for the crimes of torture as well as willful killing, willfully causing great suffering or serious injury to body or health, making the civilian population or individual civilians the object of attack, and launching an indiscriminate attack affecting the civilian population or civilian objects in the knowledge that such attack will cause excessive loss of life, or injury to civilians.”

A statement from the family’s legal team said the evidence shows “that the attack resulted in the infliction of severe pain and suffering, both physical and mental, to Mr Muhammad Ali Al Rowaishan and many of those killed and injured in the attack.”