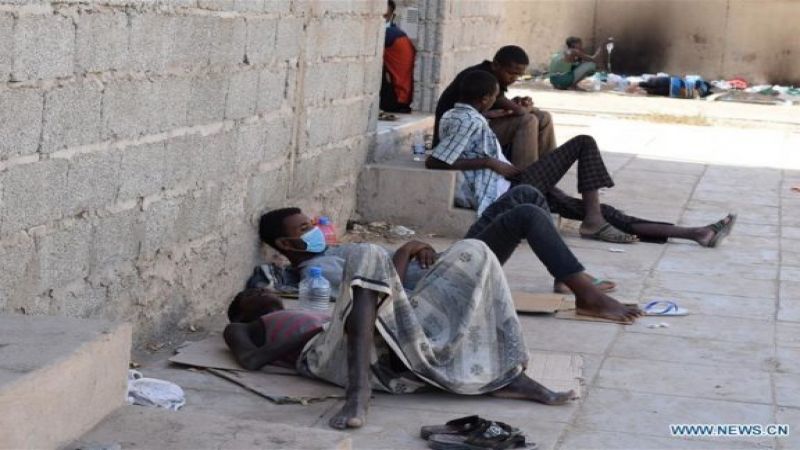 The Yemeni security authorities were overwhelmed by the large numbers of anxious and hungry African migrants who kept flocking into the country's southern provinces regardless of the anti-migration measures.

During the previous months, the International Organization for Migration (IOM) in cooperation with the Yemeni authorities voluntarily repatriated more than 1,500 illegal African immigrants via air flights from the southern port city of Aden.

Around 2,600 illegal African immigrants are still detained in the city's main sports stadium and other open-air warehouses or elsewhere in the neighboring southern provinces such as Lahj.

Khaled Subhi, a Yemeni security officer, told Xinhua that new groups of illegal African immigrants are still arriving in Aden and other port cities in the impoverished Arab country on a daily basis.

"The security authorities with their limited abilities failed to find a solution to the illegal immigration issue hitting Yemen during this difficult situation," he said.

Given lack of food and drinking water, Yemeni security forces decided to allow hundreds of detained illegal African immigrants to go out from their detention centers to look for assistance from charity organizations and feed themselves freely.

Residents told Xinhua that most of the illegal African immigrants were watched heading out from their detention centers in Aden and desperately started walking through the main road leading to the turbulent southern province of Dhalea.

"The migrants are attempting to head into Dhalea and then move to other northern provinces controlled by Houthis such as central Ibb Province," said Ahmed Asaad, a citizen based in Lahj.

They said the solution for the continuing flocking of illegal African immigrants to war-ravaged Yemen needs cooperation from other countries and the international community.

Since mid-April, authorities in the provinces of Aden, Abyan, and Lahj have detained irregular migrants, predominantly from Ethiopia, in makeshift detention sites.

At the peak, around 5,000 people were held in two sports stadium and one military camp without basic services.
In Aden's 22nd of May Stadium, IOM screened and registered 2,315 Ethiopian migrants, including 150 women and 470 children.

Yemen has been plagued in a civil war between forces loyal to the former government of Adb Rabbu Mansour Hadi and Yemen’s Houthi revolutionaries since late 2014, which has killed tens of thousands of people, mostly civilians, in the impoverished Arab country.

The long-running conflict has caused the world's worst humanitarian crisis. Currently, some 24 million Yemenis, or 80 percent of the population, need humanitarian aid and protection, with some 20 million lacking food security, according to the United Nations.