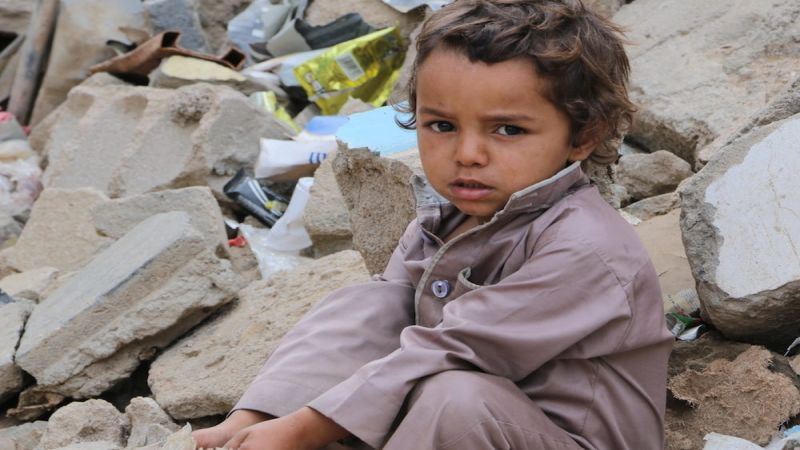 Losing a Generation: The Plight of Children in War-torn Yemen

Nearly one year ago, on August 9, 2018, an airstrike conducted by the Saudi-led military coalition operating in Yemen killed 40 children and injured 56. A laser-guided missile hit a school bus carrying boys aged between 6 and 11 years old. This particularly gruesome attack made international headlines, with the UN Secretary- General António Guterres calling for an “independent and prompt investigation.”

The attack highlighted the plight of Yemeni children trapped by a largely underreported conflict that has been raging in their homeland for more than four years. In late 2014, Yemenis took to the street calling for the downfall of the regime of President Abd-Rabbu Mansour Hadi.

In the months that followed, Yemen’s power struggle escalated. In February 2015, the Houthi Ansarulah revolutionaries backed by the party of Ali Abdullah Saleh took control of government buildings, placed Hadi under house arrest, and set up a presidential council. Hadi managed to escape from the capital to the southern port city of Aden. Less than two months later, as the Houthi forces were expanding southward, Saudi Arabia launched a military campaign against Yemen at the request of Hadi.
Since then, a civil war involving a multitude of actors have led to the deaths of tens of thousands of soldiers, Houthi fighters and civilians. The Armed Conflict Location and Event Data Project (ACLED) announced that more than 70,000 fatalities occurred between January 2016 and April 2019.

Furthermore, the conflict has devastated what had already been the poorest country in the Arab region. Yemen’s economy lies in shambles; unemployment, soaring inflation and the collapse of the national currency have left large swaths of the population destitute and unable to afford basic food staples.

The UN Office for the Coordination of Humanitarian Affairs (OCHA) estimates that “80 percent of the population – 24 million people – require some form of humanitarian or protection assistance.”

Three figures from the Agency’s 2019 Humanitarian Needs Overview underline the sheer scale of Yemen’s challenges: as of December 2018, nearly 10 million people were acutely threatened by famine; close to 18 million were unable to access clean drinking water and sanitary facilities; and 19.7 million had no way of providing themselves with adequate health services.

In the face of what has been termed the world’s “worst humanitarian crisis,” the youngest members of Yemeni society suffer the most. On top of the raging civil war, a lack of food, water, health care and education mean that children will face a dire future – if they manage to survive their daily ordeal.

Consequently, there are warnings that Yemen could lose an entire generation of young people as a result of the ongoing conflict.

A deeper look into their struggles reveals that it will be difficult to undo the damage that has already been done.

More than half of the aforementioned 24 million people in need of assistance are children, according to UNICEF. Among the myriad of challenges, hunger is one of the most pressing threats international aid agencies are trying to alleviate. It is estimated that around 85,000 children under five years old may have died due to a lack of food up to October 2018. As of the beginning of 2019, 2 million under-five-year-olds suffer from acute malnutrition. After years of malnourishment, one out of two Yemeni children is stunted.

Access to water and sanitation is another issue. The unavailability of clean drinking water and sanitary facilities, as well as the breakdown of the sewage system, have accelerated the spread of waterborne diseases. After a first cholera outbreak in 2016, Yemen is again experiencing another cholera epidemic, which has already led to over 100,000 suspected cases among people under 15 years old. Each day, 1,000 new infections are reported.

The combined effect of malnutrition and disease represents a vicious circle that significantly diminishes the chances of survival for countless children. A lack of financial resources and the pitiful state of Yemen’s healthcare system often prevent parents from providing medical care for their sick children.

More than half of the medical facilities in the country are out of use. Lastly, the civil war deprives many young Yemenis the opportunity to receive an education. The OCHA estimates that 2 million children do not attend school. Educational facilities have been partially destroyed or occupied, and thousands of teachers have not received their salary in years.

Instead of studying, the youth is fighting on both sides of the conflict. Others are exploited as a cheap source of labor or married off because their families can no longer sustain them.

The question of what will become of all those who have been robbed of their future remains unanswered.

In light of the humanitarian catastrophe that has been unfolding for the last four years in Yemen, the world needs to act urgently to stop the suffering of the Yemeni people, especially children. First, media outlets around the world must cover the Yemen conflict more extensively to put pressure on and expose the crimes of the various stakeholders involved. Moreover, the international community must successfully convince the warring parties to immediately put an end to their conflict.

Until this happens, Yemen’s youth will continue to live in an environment summed up by UNICEF Regional Director Geert Cappelaere in November 2018 as “a living hell for children. A living hell not for 50 to 60 percent of children. It is a living hell for every single boy and girl in Yemen.”