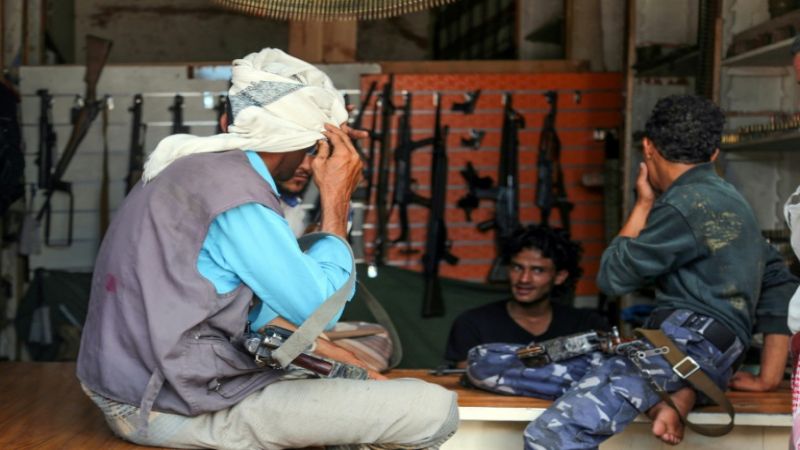 From Crafts to Kalashnikovs: Arms Souk Thrives in Yemen’s Taiz

Once overflowing with handicrafts, the old Al-Shinayni market in Yemen’s third city of Taiz is now bursting with Kalashnikovs and bullets as traders scramble to scratch out a living in the war-wracked country.

Yemen has been plunged into a devastating war since 2014. A Saudi-led coalition launched a military campaign months later to restore the resigned regime it backs.

The southwestern city of Taiz is controlled by forces loyal to the resigned regime of former Yemeni president Abd Rabbu Mansour Hadi but under siege by the Houthi Ansarullah movement.

Many civilians in tribal Yemen, the Arab world’s most impoverished country, carry personal arms even under normal circumstances and weapons trade is common.

But the war has seen the arms market surge, and traditional trades pushed aside.

“In the past, the city’s old souk (market) used to sell mainly handicraft items made by blacksmiths, potters and tailors,” said merchant Abu Ali.

“When the war erupted, most merchants turned to selling weapons,” the tailor-turned arms trader told AFP.

“Some sell (Yemen’s highly popular mild narcotic leaf) Qat, and others have fled. Half of the shops have shut down,” he added.

Armed men on motorcycles whizz in and out of the market, once a hub for selling clay pots and jugs.

Fatigues, tactical vest and helmets are on display outside the shops. Inside, AK47 assault rifles hang on the walls, with bullets and mortar shells neatly lining the shelves.

Different weapons carry different price tags. An AK47 rifle is sold for $1,090, a pistol for $818, and a bullet for half a dollar.

Like Abu Ali, the war forced Mohammed Tajer, a handicraft merchant, to turn to the arms trade to make ends meet.

“We used to work well” before the war, Tajer told AFP.

“But once the war started, we had to resort to selling bullets and weapons. If the conflict ends, we will go back to our previous professions.”

In front of one shop, a young boy in a yellow T-shirt sits on a cushion as he bangs away on a piece of metal. An older man next to him stands near a forge hammering a sharp object.

The conflict in Yemen has triggered what the United Nations describes as the world’s worst humanitarian crisis, with more than 24 million Yemenis — around two-thirds of the population — in need of aid.

Tens of thousands of people, mostly civilians, have been killed since March 2015 in the Saudi-led military coalition’s bombing campaign.

Taiz has not been spared from the violence.

Dozens of people, including children, were killed earlier this year in battles between the rebels and forces loyal to the government, as well as infighting among rival pro-government groups, according to local and medical sources.

Abid al-Rashdi, who still sells handmade goods at Al-Shinayni, said he struggles to keep up his line of work amid a conflict that shows no sign of abating.

“In the past five years, the blacksmith and pottery professions have been greatly impacted while arms trade flourished,” he told AFP.

Shuttered shops secured with padlocks lie on either side of an open storefront that says “tailoring for men”.

Inside, on the shelves where threads and fabrics were once placed, bullets and guns now sit, some locally produced and others smuggled into the country.