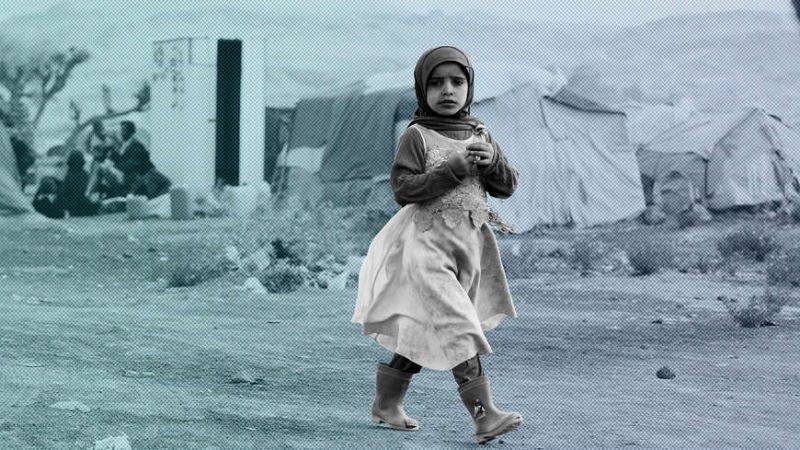 As Muslims around the world celebrated Eid al-Fitr, Yemen’s internally displaced persons (IDPs) were forced to live in the open in Sana’a’s largest IDP camp under difficult conditions and in the absence of the most basic necessities. The heavy rains that flooded the region in late May, including the capital Sana’a, increased their suffering.

Ali Yahya Mohammed told Al-Monitor that he was forced to leave his home in the city of Saada, northern Yemen, when the Saudi-led coalition launched its offensive in March 2015.

Mohammed arrived at the Dharwan camp, 30 kilometers (19 miles) north of Sana’a, where the United Nations Office for the Coordination of Humanitarian Affairs (OCHA) provided him with three tents and all due services, including money. But recently OCHA has had to reduce support to the IDPs in light of the growing number of people in the camp, thus affecting Mohammed, his wife and their 10 children who live in the tents that need ongoing maintenance and extra fabric to protect them from the heavy rains.

On May 31, the UNHCR Operational Update on Yemen reported there were “3.65 [million] displaced since March 2015” where “more than 80% have been displaced more than a year” with 1.28 million IDP returnees.

The International Organization for Migration’s latest Displacement Tracking Matrix cited a total of 42,596 families who have been displaced between Jan. 1 and May 26 of this year.

Before the war, people would buy clothes and food ahead of the holy month of Ramadan to celebrate Eid al-Fitr, but poor Yemeni families have been struggling to buy necessities and those affected by the heavy rains have had additional worries. Mohammed was forced to search for fabric for his tents, instead of buying new clothes for his children.

“When the rain hit, the water entered the tents and poured through the roofs on our heads,” Mohammed recalled. “My children caught a cold because we do not have enough clothes and blankets.”

“I use one tent as a kitchen and the other as a bedroom for my older sons,” Mohammed said. The third tent not only serves as a bedroom for Mohammed, his wife and younger children, but also as a living room for the family. He said this tent was not damaged as much as the others, as he had bought extra fabric prior to the storms by saving up the money he got from selling plastic bottles, while his children were begging in a nearby market.

The other two tents, however, were damaged during the storm. “I am hoping to save some money [from donations] to buy a new tent or [more] fabric [to fix the damaged tents],” Mohammed added.

Belal Abdullah, a supervisor in the northern part of the Dharwan camp, told Al-Monitor that UNICEF offered 80,000 Yemeni riyals (around $320) to the camp’s administration about one year ago, when OCHA stopped providing aid. A company affiliated with UNHCR also provided food vouchers, but not all IDPs got them.

Al-Monitor spoke with the company’s communication officer, who said the delay was due to investigations into the names of the beneficiaries. He did not provide further details as he is not allowed to speak to the media.

“I need fabric for the tents, clothes, mattresses and food,” Mohammed said as four of his children sat bedside him wearing worn out clothes. “I did not buy [them] new outfits for Eid,” he added.

Muslims are encouraged to donate clothes during Ramadan to those in need, an act known as zakat al-fitr, so those less well-off can celebrate Eid al-Fitr, too.

Mohammed said that an organization, which he did not name, had provided the IDPs with donated clothes and money in the past.

But this year, no one reached out to them, except for one trader who gave Mohammed and others some money, while another man has been coming to the camp before sunset every day for the past three weeks to hand out bread to the camp’s residents.

Abdullah Ali Saleh, from Marib governorate, received the same amount of money. He told Al-Monitor that he didn't know how to spend the money, and it wasn’t enough to buy clothes for his eight children.

The financial situation of IDPs has further worsened since late last year, when the World Food Program (WFP) accused the Houthi revolutionaries … of stealing food aid and threatened to suspend its operations. The Houthis denied the accusations.

On May 20, the disagreement between WFP and the Houthis escalated and WFP threatened to suspend the aid if no progress is made on previous promises that the Houthis would facilitate the work of aid organizations.

“This phased suspension of WFP operations will be taken as a last resort and we will do everything within our powers to ensure that the weakest and most vulnerable — especially children — do not suffer,” WFP said in its latest statement.

Abdul Malek al-Ejri, a member of the Houthi delegation to the UN-led peace talks, said well-informed sources from the Yemeni presidency claim the dispute between WFP and the Houthis revolves around Houthi accusations that the world body is distributing spoiled food. The Houthis also rejected WFP requests to take the fingerprints of beneficiaries, as they fear WFP will share them with third parties.

On May 22, Ejri wrote on Twitter, “No foreign party has the right to take the fingerprint of citizens nor share their personal data with the countries of aggression,” in reference to Saudi Arabia and the United Arab Emirates, which regularly offer donations to UN groups.

Mohammed said that he has not received any food baskets from WFP nor from any other aid agency for a while now. Along with his son Bander, 11, Mohammed collects plastic bottles and sells a full bag of them for $1 in the nearby Dharwan market.

Two of Mohammed's neighbors told Al-Monitor that he has not received food aid from WFP since 2015, blaming leaders of the camp that they had deceived Mohammed when they had told him not to register when the registration committee from the National Authority for the Management and Coordination of Humanitarian Affairs and Disaster Management — which is in charge of registering IDPs to receive aid from WFP — visited the camp in 2015.

Omar Ismail, one of the neighbors, said the leader of the camp back then told Mohammed that he would receive a card from the committee to receive food. But he never received any aid and the local leaders stole the food. WFP distributes aid through local organizations, and not directly.

Abdullah confirmed that about 70 families out of 320 families who take shelter in the camp have not received any kind of food aid from WFP since 2015. “We have demanded the organization [unnamed] to register them, and we even traveled to Sanaa and held a protest in front of the organization’s building — but to no avail,” Abdullah said.

Saleh urged WFP not to suspend its aid because many depend on it.

“What did we do to deserve this? Our only sin is that we are poor looking for something to eat,” Saleh said. “If they [WFP] have a disagreement with senior officials, why should we become the victims?"