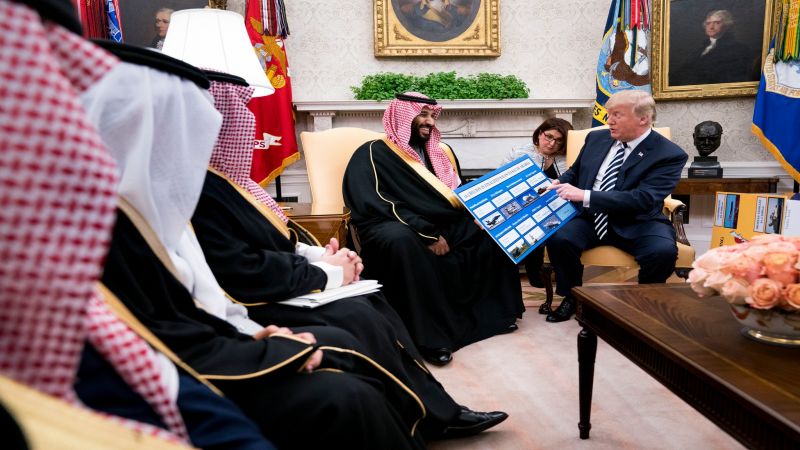 By Michael LaForgia and Walt Bogdanich

When the Trump administration declared an emergency last month and fast-tracked the sale of more American arms to Saudi Arabia, it did more than anger members of Congress who opposed the sale on humanitarian grounds.

It also raised concerns that the Saudis could gain access to technology that would let them produce their own versions of American precision-guided bombs — weapons they have used in strikes on civilians since they began fighting a war in Yemen four years ago.

The emergency authorization allows Raytheon Company, a top American defense firm, to team with the Saudis to build high-tech bomb parts in Saudi Arabia. That provision, which has not been previously reported, is part of a broad package of information the administration released this week to Congress.

The move grants Raytheon and the Saudis sweeping permission to begin assembling the control systems, guidance electronics and circuit cards that are essential to the company’s Paveway smart bombs. The United States has closely guarded such technology for national security reasons.

Multiple reports by human rights groups over the past four years have singled out the weapons as being used in airstrikes on civilians. One attack, on a Sana funeral home in October 2016, led the Obama administration to suspend bomb sales to the Saudi-led coalition in Yemen.

The new arrangement is part of a larger arms package, previously blocked by Congress, that includes 120,000 precision-guided bombs that Raytheon is prepared to ship to the coalition. These will add to the tens of thousands of bombs that Saudi Arabia and the United Arab Emirates have already stockpiled, and some in Congress fear the surplus would let the countries continue fighting in Yemen long into the future. The move also includes support for Saudi F-15 warplanes, mortars, anti-tank missiles and .50-caliber rifles.

The emergency declaration, invoked in part because of tensions with Iran, prompted a broad bipartisan pushback from lawmakers who were concerned not only about the war, but also about whether the Trump administration was usurping congressional authority to approve arms sales.

A group of senators that includes Lindsey Graham, the South Carolina Republican, Rand Paul, the Kentucky Republican, and Robert Menendez, the New Jersey Democrat, announced on Wednesday that they would introduce 22 separate measures expressing disapproval of the deals.

“Few nations should be trusted less than Saudi Arabia,” Mr. Paul said in a statement on Thursday. “In recent years, they have fomented human atrocities, repeatedly lied to the United States and have proved to be a reckless regional pariah. It is concerning and irresponsible for the United States to continue providing them arms.”

In the House, the Foreign Affairs Committee has scheduled a hearing for next week in which members plan to question R. Clarke Cooper, the State Department official whose bureau licenses arms exports.

“The Saudis and Emiratis have become so intertwined with the Trump administration that I don’t think the president is capable of distinguishing America’s national interests from theirs,” said Representative Tom Malinowski, a New Jersey Democrat who sits on the committee. “The administration has presented us no evidence that Saudi Arabia and the U.A.E. face any substantially new or intensified threat from Iran that would justify declaring an emergency.”

Mr. Malinowski, a top human rights official under President Obama, said the bombs were for use in Yemen, not for defending the Saudi or Emirati homeland from Iran, as some Trump administration officials have suggested.

The White House did not respond to a request for comment.

A Raytheon spokesman said there was nothing unusual about the production arrangement.

“Industrial participation by local partners has been an element of international sales of military equipment for decades,” said the spokesman, Mike Doble. “These activities and related technologies are governed by the Arms Export Control Act, controlled by the International Traffic in Arms Regulations, and conform to all licensing rules and restrictions of the United States government.”

Defense contractors have established close ties with the Trump administration, and key executives from several companies, including Raytheon, have made their way into high-ranking positions. Raytheon’s former vice president for government relations, Mark T. Esper, was confirmed as Army secretary in 2017.

The defense firm has also cultivated ties to the Saudi government. During President Trump’s visit to the kingdom in May 2017, Raytheon signed an agreement to work more closely with the Saudi Arabian Military Industries Company, a holding company owned by the country’s sovereign wealth fund. It was unclear whether the new production deal fell under that plan.

The production agreement took some lawmakers by surprise. Representative Ted Lieu, a California Democrat and an outspoken critic of the Yemen war, said it seemed “to serve no purpose other than to forfeit our technology and prevent future congressional oversight.”

The arrangement, which would effectively outsource jobs, appears to be at odds with Mr. Trump’s position that arms sales are important because of the American jobs they create.

Rob Berschinski, a senior vice president at Human Rights First, an advocacy group, said the administration’s decision was “about siding unreservedly with favored Middle Eastern authoritarians, no matter who they kill or how they repress their citizens.” Mr. Berschinski, a former deputy assistant secretary of state, added, “It has nothing to do with American jobs.”

Congress had been informally blocking the sale of the smart bombs at least since May last year, when Mr. Menendez and Representative Eliot L. Engel, the New York Democrat, expressed concerns over how the Saudis were using the weapons in Yemen. Opposition intensified after American intelligence officials concluded that the Saudi government played a role in the murder of Jamal Khashoggi, the Saudi dissident and columnist for The Washington Post.

But then, last month, on the Friday before Memorial Day weekend, Mr. Trump took the rare step of declaring an emergency to push these weapons out the door.

In a May 24 letter, Secretary of State Mike Pompeo notified congressional leaders of the emergency declaration, waiving congressional review of the weapon sales. Mr. Pompeo said he took into account “political, military, economic, human rights and arms control considerations.” The State Department on Monday disclosed more details to Congress, including the nature of the arms sales.

“If Saudi Arabia is able to develop an indigenous bomb-making capability as a result of this deal, it will undermine U.S. leverage to prevent them from engaging in indiscriminate strikes of the kind it has carried out in Yemen,” said William D. Hartung, director of the Arms and Security Project at the Center for International Policy, a think tank.

The authorization paperwork signed by Mr. Pompeo offers no timeline for the shared operations to get underway, and Raytheon representatives have said they are still negotiating over details with the Saudi government, according to a congressional aide.

Aside from potentially providing the Saudis with more bombs to use in Yemen airstrikes, the arrangement raised security concerns among lawmakers, who were seeking assurances that the Saudis could prevent the American technology from falling into the wrong hands.

Both Republicans and Democrats also noted that it called for creating manufacturing jobs in Saudi Arabia that might otherwise have been located in the United States. And they expressed worry that the Saudis might eventually copy the technology and use it to produce their own weapons, which they would be free to use in Yemen or sell to whomever they chose.

The Saudis have been carrying out regular airstrikes in Yemen since March 2015.... The war has created what the United Nations has called the world’s worst humanitarian crisis, pushing millions to the edge of starvation and leading to the spread of cholera and the deaths of thousands of civilians.